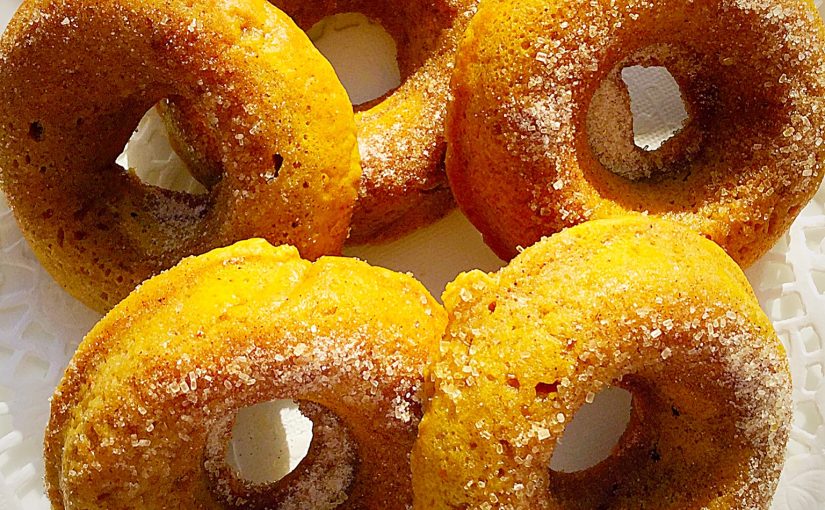 Autumn is such a beautiful season. As leaves change through a rainbow of green, yellow, gold, orange and rust. Low sunlight casting a golden glow on days that are spared from wind and rain ravaged storms. Because Autumn is a season of transition. Summer salads gradually disappear, replaced by comforting soups, stews and roasts. While these Baked Pumpkin Spiced Doughnuts not only look autumnal, they warm the senses with long since forgotten spices.

Inspiration hit to make these Baked Pumpkin Spiced Doughnuts after reading a similar recipe from Baker By Nature. Although I had never baked with pumpkin purée before, the first batch had me hooked. Since, as is the nature of most bakers, after testing, the recipe needed a little tweaking to accommodate our family’s taste preference, a second batch was the made the following day.

Baked Pumpkin Spiced Doughnuts really are the beautiful ochre colour that can been seen in the photographs. Also the spiced sugar sparkles in the low afternoon sunlight. So, for once there wasn’t a temptation to sprinkle with glitter!

While the inhabitants of North America’s continent have been using pumpkin in pies, cakes and bakes for many years, over the pond we have been missing out. It seems that here in the U.K. we tend to carve out a stinky, cabbage smelling pumpkin at Halloween, without a thought to eating the flesh. Yes I know we eat butternut squash, in fact I put it in this Roasted Garlic Butternut Squash Soup. Yet, I cannot feel as though we are losing out.

Pumpkin purée lends a tenderness to the crumb of these doughnuts that has to be tasted to be believed. Because the flavour is subtle, it allows the pumpkin spice mix to compliment, rather than overwhelm it. Finishing with a sprinkle of cinnamon spiced sugar creates the contrast in texture and awakens the senses. Resulting in a not quite as light as a fried doughnut, yet delicious in its own right. 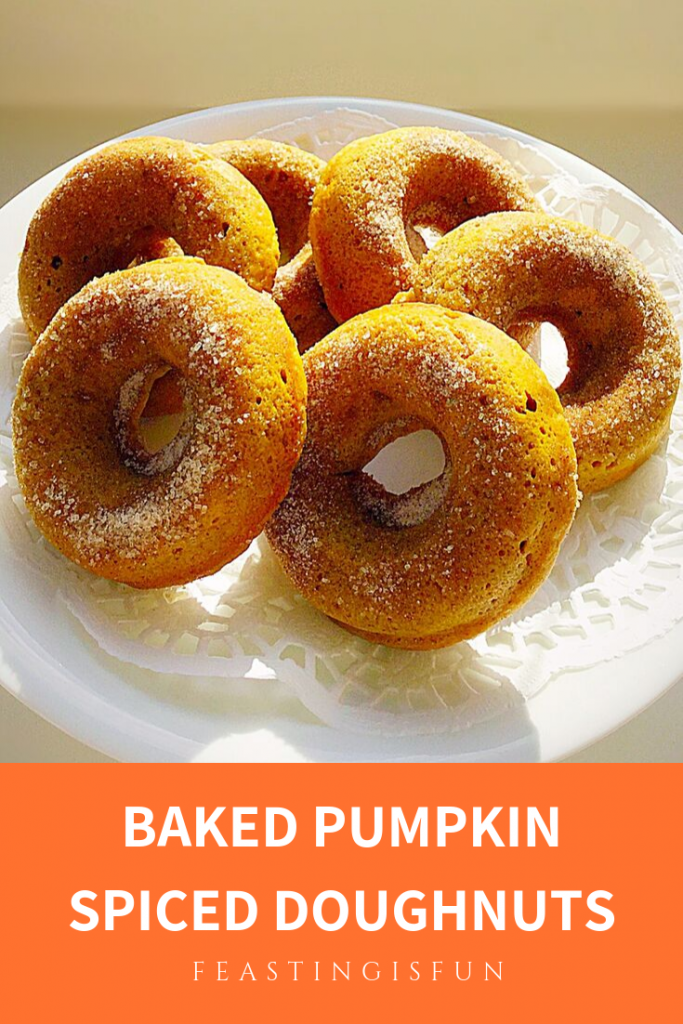 Mix together and store in an airtight jar.

To coat the Doughnuts:

Serve immediately, with a warming drink.

I heated a Chocolate Chip Latte Milkshake in a jug with a little extra milk, poured into fancy glasses and given a splash of ginger syrup. The drinks were then topped with mini gingerbread sprinkles. Resulting in a Cafe Culture experience at home. Alternatively, make a hot chocolate and add a sprinkle of cinnamon or ginger spices.

Finally, for those of you who would rather not, or cannot, go out, especially when the weather is bleak, this is the ultimate, at home, Cafe Culture treat!

If you have enjoyed the recipe for Baked Pumpkin Spiced Doughnuts you may also enjoy these:

When served slightly warm I think that these doughnuts truly are at their best. While the recipe makes 8 individual Baked Pumpkin Spiced Doughnuts unless you are baking for more I really wouldn’t recommend doubling it. Because the preparation time is scarcely 10 minutes max and these are definitely better eaten the day they are made. That said, kept in an airtight container they will last an extra day. Pinged for 10 seconds in the microwave and they are almost back to freshly baked tenderness.

Why not take a look at my friend Becky’s blog?

It’s full of fantastic recipes and is written in a step-by-step style. Also, you are sure to enjoy her Pumpkin Spice Pumpkin Bisuits.