Do any of you, my lovely readers have fears? I like to think that I don’t, yet I am never too happy with heights – the bridge in ‘Indiana Jones and the Temple of Doom’. I’m pretty sure I’d have to be blindfolded, gagged and carried across!! Another irrational fear I’ve had for a while has been baking with silicone. Because it looks like plastic to me and plastic melts in the oven – right? Well today I faced my fear and baked this delicious Raspberries Cream Giant Doughnut using a silicone mould!

And guess what – it didn’t melt! 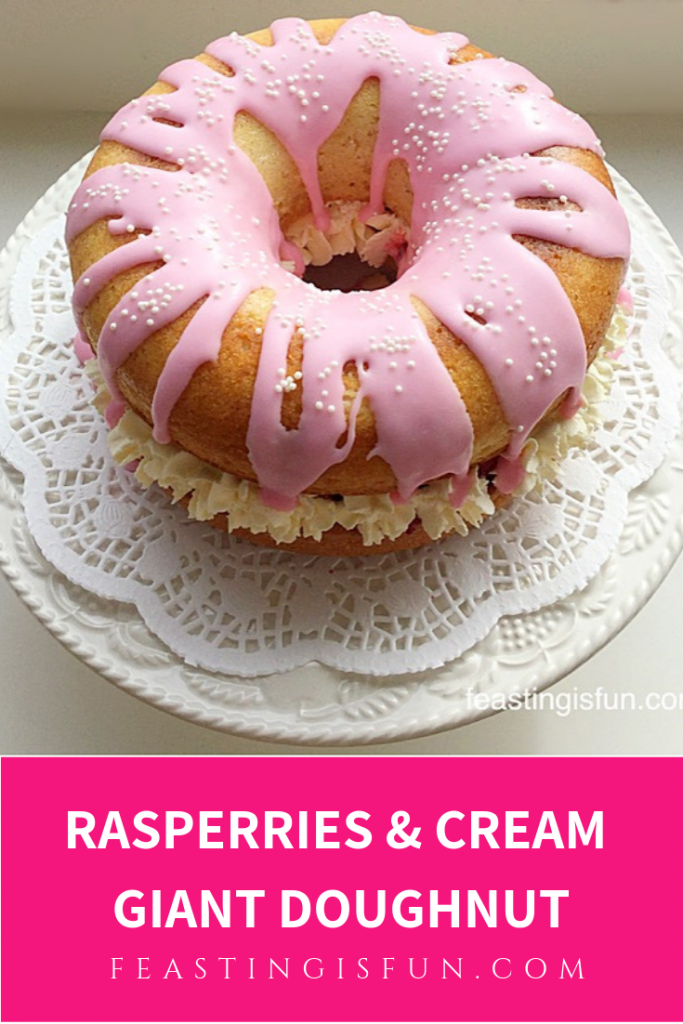 Yep you can always trust Sammie to be at the forefront of new baking technology 😉.

I cannot tell you what a relief it is to have finally baked using a silicone mould. So much so that I have to agree with friends that bake with silicone all the time, they are an absolute dream to work with. I’ve had these silicone giant doughnut moulds since the January sales, I like to ease into things gradually!!

Seasonal Fruit And Vegetables Are Unbeatable

When baking and cooking I really try to use seasonal fruit and vegetables. So this Raspberries Cream Giant Doughnut has defrosted frozen raspberries in the middle. Because raspberries are most definitely not in season, however I find the frozen British raspberries from Waitrose are fantastic quality and perfect for use, as fresh fruit, during the colder months.

We grow quite a bit of fruit in our back garden, including raspberries, strawberries, cherries, apples, plums and pears – ooh blackcurrants, redcurrants and blackberries too. Last year wasn’t brilliant for raspberries in our garden, yet we had buckets full of cherries. Our children are duly dispatched to various neighbours houses, sharing the fruit.

In a good year when there is an abundance of raspberries I always try to freeze some down. Usually there are only enough for our trifle on Christmas Day, as we love eating them fresh, or turning them into jam. Raspberry jam has to be my absolute favourite and I was going to make a small batch of fresh jam to use in this Raspberries Cream Giant Doughnut – however, my body had other ideas.

Rather I focus on the positives, those being: this Raspberries Cream Giant Doughnut is so easy to make, bake and decorate. And on top of that, once the doughnut is assembled and sliced into – well, the flavour is outstanding. Resulting in a sponge that is lighter than light, the ‘fresh’ raspberry tartness works well with the sweetness of the jam and the hint of almond in the glacé icing, adds that extra level of flavour.

At a guess I’d say this should serve 8-10 people, but there again if they want seconds…….

If you have enjoyed this Raspberries Cream Giant Doughnut recipe you may also like these:

While Sunday tea may not be a national tradition anymore, sometimes it’s nice to have a beautiful slice of something delicious, mid afternoon, just because you can!

Since I find baking a pleasure not a burden. Yet, sometimes it is nice to share things out, that way we all get to enjoy each other’s bakes!

Personally I’m all for tradition and think bringing back a proper Sunday afternoon tea, where all the family gathers together, is a brilliant idea. Perhaps not every week, although there is nothing wrong with that. Rather, once a month, with everyone contributing so that the burden of baking doesn’t fall on only one pair of shoulders.

Whatever you make and bake in your kitchen, remember feasting really is fun, especially when we share with others.